The cartels just across the border from El Paso, Texas erupted in violence several years ago. Ciudad Juárez was ground zero in Mexico’s war against drug cartels. The violence spread until citizens in Michoacán organized what became known as Autodefensas or self-defense organizations.

Dr. José Manuel Mireles, the leader of the self-defense group in the Mexican state of Michoacán, was released from prison on the morning of May 12, 2017, after serving nearly three years in prison. Cartel Land is a documentary film that tells the story of how, under Dr. Mireles, the Autodefensas, recruited and trained fellow citizens to stop the Knights Templar in Tepalcatepec. Starting in February, 2013, the citizens of Tepalcatepec confronted the Knights Templar cartel, which had been terrorizing the population of the Tierra Caliente area of Michoacán. 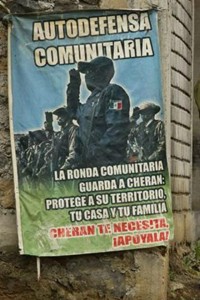 The government tried to squelch the Autodefensas groups. Nevertheless, armed citizens succeeded in keeping the cartels out of many cities. The need to protect residents of Michoacán became desperate when the cartels beheaded law enforcement officers, raped women and killed masses of innocent men, women and children in order to terrorize the Michoacán, citizenry. Allegations that the Mexican and U.S. governments were colluding with the cartels are still pervasive.

The drug possession charge was dropped, and Dr. Mireles has never been brought to trial for the weapons charge. He was released on 30,000 pesos bail, and had to agree to not associate with other self-defense groups.

Dr. Mireles had serious health problems caused by his captivity. He also wrote a book during his incarceration

There have long been rumors that that Islamic terrorists are participating in Mexican cartel operations. Drugs, kidnapping, extortion and beheadings are the stock in trade for the cartels and ISIS. By hitting U.S. interests, the cartels and terrorists can send a potent message to their enemies and also send a message to their friends. Apparently, the cartels realize that attacking the United States is not in their best interest at this time. Nevertheless, our government should be advocating in favor of the Autodefensas and any financial support that goes to Mexico should be contingent on a hands off policy for such armed self-defense volunteers South of our border.

The problem is that there can be a tendency for the volunteers to fund their activities with the same criminal activities that have made the Autodefensas so indispensable. Thus, the need is for the U.S. to condition funds for Mexican law enforcement on the Mexican government’s agreement to permit financial assistance to the beleaguered citizens of Mexico that are free of corruption and organized into effective self-defense groups.

The Autodefensas in Michoacán and many other provinces of Mexico are now growing powerful again. Some Autodefensas members of lived in the United States and learned their skills on the streets of LA. But bearing arms makes citizens disciplined, vigilant and alert to danger whether it is from domestic political factions, criminal organizations or foreign terrorists. Every American should be in favor of making guns available to law abiding Mexican citizens.

Mexico’s government waged war with the drug cartels by militarily occupying many areas within Mexico. But the government often fought one cartel by enabling other cartels. These things may not be as far from your town or city as you think! Most journalists in Mexico do not report on these matters. They know that there is certainty of violent and gruesome death. Judges, prosecutors, police and politicians are also cowed and subject to violent reprisals.

Breitbart has an effective network of correspondents reporting the facts out of Mexico. The best way to stop the violence from coming across the border is to empower Mexican citizens to stand together and work to make their nation successful and free from violence.