The Washington Arms Collectors featured the Armed Defense Training Association in the October, 2016 edition of the GunNews.  We asked the author, Ed Streit, the current ADTA President and a founding member of the citizen self-defense group, to send us the article.  The Action Training Group, Inc. in Eastern Washington and North Idaho follows the model created several years ago when the ADTA founders, including Spokane-area criminal defense lawyer, Mark Knapp, first started exploring ways to create a gun range in Federal Way, Washington.  The following is the complete article from the GunNews. 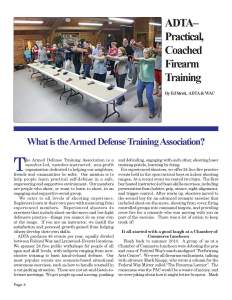 The Armed Defense Training Association is a member-led, member-instructed, non-profit organization dedicated to helping our neighbors, friends and communities be safer. Our mission is to help people learn practical self-defense in a safe, empowering and supportive environment. Our members are people who shoot, or want to learn to shoot, in an engaging and supportive social group.

We cater to all levels of shooting experience. For beginners, we offer the opportunity to learn at your own pace with mentoring from experienced members.  For experienced shooters, we provide shoot-on-the-move and low-light defensive practice that you cannot get on your own at the range.  For instructors, we instill the satisfaction and personal growth gained from helping others develop their own skills.

ADTA produces 48 events per year, equally divided between Federal Way and Lynnwood-Everett locations. We sponsor 24 free public workshops for people of all ages and skill levels, with subjects ranging from new-shooter training to basic hand-to-hand defense.  Our most popular events are scenario-based situational awareness exercises, such as how to handle yourself in a car-jacking situation.  These are not sit-and-listen-to-lecture meetings.  We get people up and moving, pushing and defending, engaging with each other, shooting laser training pistols, learning by doing.

For experienced shooters, we offer 24 live-fire practice events held in the open tactical bays at indoor shooting ranges. At a recent event we rented two bays.  The first bay hosted instructor-led basic skills exercises, including presentation from holster, grip, stance, sight alignment, and trigger control.  After getting warmed up, shooters moved to the second bay for an advanced scenario exercise that included shoot-on-the-move, shooting from cover, firing controlled groups into command targets, and providing cover fire for a comrade who was moving with you as part of the exercise.  There was a lot of action to keep track of!

It all started with a good laugh at a Chamber of Commerce luncheon.

Flash back to summer 2010. A group of us at a Chamber of Commerce luncheon were debating the pros and cons of Federal Way’s much-maligned “Performing Arts Center”.  We were all firearms enthusiasts, talking with attorney Mark Knapp, who wrote a column for the Federal Way Mirror called “The Firearms Lawyer”.  The consensus was the PAC would be a waste of money, and we were joking about how it might better be spent. Mark topped us all by saying, “Instead of a Performing Arts Center, maybe what Federal Way needs is a Shooting Arts Center!”  People turned to stare as we cracked up with laughter at the thought of city hall actually allowing a shooting range, right here in river city!

But it got us thinking… Thinking about how great it would be if Federal Way WERE to have a shooting range.  But given the fact that we were basically just a bunch of guys wanting to shoot together, with the goal of improving our skills over time, we focused more on the idea of setting up shooting events. Subsequent discussions led to a loosely formed group that began meeting regularly in a Federal Way real estate office. The meetings continued throughout the latter part of 2010, culminating in two significant events:  On Dec. 4, 2010, Mark Knapp, under his by-line “The Firearms Lawyer,” published his now-famous Federal Way Mirror column titled, “Federal Way needs a Shooting Arts Center,” and on Dec. 31, 2010, the loosely formed group of business guys tightened up and transformed into the founding board members of the Armed Defense Training Association, a non-profit community organization headquartered in Federal Way, Washington.

Despite our focus on shooting events, we just couldn’t get past the idea of wanting our own shooting range. This led to the creation of a “Range Development Committee” that began holding meetings with the planning people at city hall, trying to determine where a range might be built within the city.  Their initial answer was pretty much, “Nowhere.”  We were fortunate that our guys were acquainted with the workings of city hall, and their patience and persistence over a period of many months led to a softening by the planning people to a position more like, “Almost anywhere!” Then, by a stroke of good fortune, another local businessman, who in the past had been brushed off by city hall, rekindled his efforts to open an indoor range in Federal Way.  The trail we blazed led to success.  An article in the Federal Way Mirror of Sept. 25, 2012, announced the opening of the Federal Way Indoor Range, located right in the heart of the city.

Finding focus in a new organization.

But a little bit of success can be a mixed blessing. Yes, we were elated as we begin shooting in a new modern facility, close to home.  But on the other hand, we were cast slightly adrift after accomplishing a major goal.  It was one of many bumps we experienced as a new organization.  Two years after forming ADTA, it was time to more clearly define our purpose and direction. 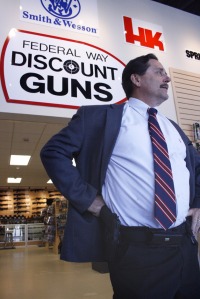 Range development was not our only effort during our first couple of years. We had a lot of fun putting on our live-fire practice events, coming up with new variations that helped our participants build practical shooting skills.  But to sustain that effort and grow as an organization, we began to recognize the need for building some structure into the equation.  This led us to form three basic working groups within ADTA:  RSO Training, Instructor Development, and Marketing.

While continuing to produce 24 events per year in Federal Way, ADTA focused much of its efforts in the next couple of years on developing a solid cadre of Range Safety Officers and Instructors, based largely on principles gleaned from NRA and military training methods. Our RSOs and Instructors attend classes and serve apprenticeships before assuming responsibilities on their own.

The scope of an ADTA RSO’s responsibilities are less complex than that of their NRA counterparts, in that we focus entirely on handguns: semi-auto pistols and double-action revolvers.  But their safety responsibilities are equally great:  assuring the safety of participants and staff, including safety meetings, first-aid skills, emergency procedures, and of course constant vigilance over shooters.

Like all new organizations we aspired to grow. By talking with attendees at our monthly public meetings, it became clear that many were inexperienced with firearms, and had come desiring to learn to shoot.  Although our focus had been on experienced shooters, our market research disclosed there were a large number of new shooters coming online every year.  Statistics from the National Shooting Sports Foundation (NSSF) revealed that in 2013, 30% of handgun purchasers bought their first and only handgun, resulting in about 2 million new handgun owners in that year. And at least that many every year after.  NSSF research also documents the rapid growth of female handgun owners, a 77% increase from 2005-2011, and current NSSF marketing bulletins identify gun sales to females as the fastest growing market segment today.

With this in mind, ADTA developed a “New Shooter” training program consisting of two parts: A free classroom workshop open to the public, followed by a live-fire event open to those who had joined ADTA at the public meeting.  The strategy was to provide a community service, consisting of new-shooter firearms safety and gun-handling training, while building paid membership.

So far we’ve been successful with one aspect of this program, having trained literally hundreds of new shooters in our classroom sessions, including 50% female attendees. The community benefits we provided brought us kudos from local service organizations and law enforcement leaders, but our “conversion rate” of classroom attendees who became live-fire shooters left us wishing for more.

The inspiration for a better way to train new shooters came from an unlikely direction. How many of your kids learn math by watching Khan Academy videos?  Worldwide, there are about 10 million of them, according to Forbes Magazine.  Khan “flips” the traditional classroom:  “Lectures” become videos watched at home, and “homework” is done in the classroom where expert help is available.  By modeling our training program after Khan Academy, we are taking advantage of proven methods.  And by adding “mentoring” to the equation, we have come full circle to the way firearms handling has traditionally been taught:  one-on-one with a trusted friend or relative. The net result:  Our trainees watch videos to learn the basics, then practice the moves they saw with their Mentor, in workshops that are kept small to assure individual attention.

ADTA’s new-shooter Mentoring program, called “New Shooter 101”, is available to ADTA yearly members as a benefit of membership. Trainees sign up with an ADTA Mentor who then guides them through the process, consisting of a series of Mentor-led workshops.  Our Mentors are ADTA RSO volunteers whose reward is the satisfaction gained from helping others develop their own skills. Trainees watch videos to learn the basics, then practice the moves with their Mentor.  The new shooters “graduate” by attending one of our live-fire practice events, having learned enough to feel confident in their skills, in terms of both safety training and basic firearms handling.  You can learn more about our Mentoring program by visiting http://ArmedDefense.org/NewShooter101.
How can WAC members become involved?

While we’ve focused much of our recent effort into attracting new shooters, this in no way detracts from our ongoing commitment to experienced shooters. Our marketing efforts at WAC shows have brought us new members who are expert shooters, some of whom have advanced to become ADTA Instructors and Board members.  Our main appeal to WAC members is our non-competitive live-fire practice events, including shoot-on-the-move, shooting from cover, low-light scenarios, and expert mentoring in defensive handgun skills.  ADTA also appeals to experienced shooters who want the satisfaction and personal growth gained from helping others develop their own skills. 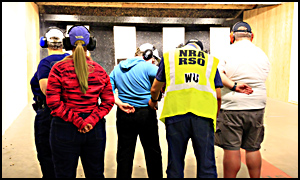 Want to learn more about the Armed Defense Training Association? Start by visiting our website at http://ArmedDefense.org. Then get to know us by attending our free public workshops, held monthly at Federal Way and Lynnwood-Everett locations. You’ll find the event schedule on our website.

Want to get involved? Become an ADTA member and join in the fun by shooting at our live-fire practice events.  You can also help us turn beginners into experienced shooters as an ADTA Mentor. We’re in our sixth year and just starting to hit our stride.  Consider being an ADTA volunteer and help us make our next six years the most exciting yet! 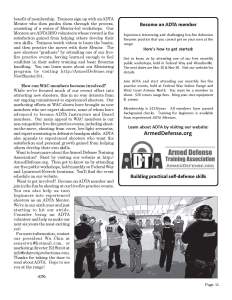 For more information, contact  senseiwu@hotmail.com, or ADTA President Ed Streit at info@edstreitproductions.com. Thanks for taking the time to read about ADTA.  Hope to see you at the range!