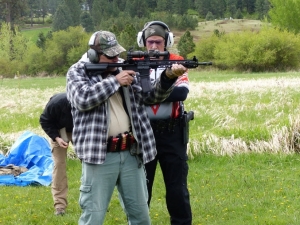 Patrick Kelley’s dad taught him to shoot. He went on to become an avid Bull’s-eye target shooter and shotgun competitor. After years of developing skills in the fundamentals, he started shooting USPSA and 3-Gun matches. He is now in his 50’s and one of the top 3-Gun shooters in the world with many accomplishments. Devoted to passing on the techniques he has learned to a new generation of shooters, Kelley is also an announcer for 3-Gun Nation on the Sportsman’s Channel.

Fifteen of us attended the INLAND NORTHWEST ACTION SHOOTERS’ 3-Gun seminar at the Spokane Valley Rifle & Pistol Club in Mica, Washington on May 10. Pat started out by discussing the fundamentals of marksmanship. He states unequivocally that the fundamentals learned in Bulls-eye and clay target sports are what earned Kelley so much success in shoot-on-the-move disciplines.

Trigger Pull: the heart of the matter in multi-gun shooting
Trigger control, of course, is the heart of the matter. No matter how quickly you are traversing a complicated course of fire, things always boils down to a proper trigger pull. Misses result from jerking the gun out of alignment when the trigger is pulled.

Once Pat had us confirm that our sights were aligned, we proceeded to shoot steel plates with pistols while moving backwards, forward and sideways. Kelley quickly had us performing similar drills with rifle. Learning the rhythm of shooting when the shooter’s weight is transferred to the front foot is difficult.

Each technique takes a lot of practice after the class is over and the homework assignments are demanding. The ability to maintain fundamentals while engaged in a very intuitive and fluid series of movements with transitions to three different weapons takes a great deal of discipline.

Game plan for action
The shooter must have a game plan and be ready to change the plan at any point. No where does this become more apparent than when shooting a shotgun which has an inherent tendency to malfunction- more than rifles and pistols which have a way of developing problems under conditions of many rounds that are rapidly fired.

When things are working, smoothly the shotgun is ideal for swinging through a series of targets. Our class practiced shooting steel targets while swinging the shot gun back and forth with a nonstop motion. It was easy to miss but the goal is to keep the muzzle moving at a steady speed. We quickly realized the potential to shoot faster than with a rifle because of the fact that each shot pattern shades into the following one and the need to be totally accurate is not as great as with a single round.

The Mica Range
The range at Mica is surrounded by green hills and farmland and sits alongside farmland that is hemmed in by trees. Long distance shots of 1000 yards go up into the timbered areas. But we were shooting at distances of about 40 yards or less. The weather was sunny- 60 degree temperatures- and right next to us were USPSA pistol shooters shooting a match hosted by the Inland Northwest Action Shooters which also provided the Patrick Kelley seminar.

Some of us left the class for about 30 minutes to shoot through the four courses of USPSA targets. Normally this would take the better part of the day but the range officers let us go ahead of the other shooters so we could get back to class.

On Sunday, the class shot the INAS 3-Gun Match at the Mica location as a squad of 15 shooters with Kelley as our coach. The weather was perfect and we started out with rifle, shooting a rack of small plates about 40 yards out. I was surprised how many of the shooters could quickly knock down the plates without missing. I had to shoot at one plate twice but they all went down nicely. Then we transitioned to popper plates with shotguns. I had to pick up another plate that I missed from swinging through the plates too rapidly with my Mossberg 930.

Some of the challenges you face
All three courses of fire held challenges for our squad which had shooters that have never shot a 3-Gun match and experienced practitioners of the sport. There were four clays hung out on two ropes at close quarters. The red dot optics that most of us use on our rifles makes for an offset at close range; the offset requires that a shooter aim about three inches high- especially with such small targets. I hit each clay on the first shot but then missed a swinging paper target with my pistol. A failure to neutralize adds seconds to the time. Missing adds up quickly and will rapidly bring down even the fastest times. We all enjoyed watching our instructor whip through the courses of fire with smooth reloads and very good accuracy.

I shot in the open category and there were only a few other shooters shooting with optics on their pistol. It takes some practice to locate the red dot on the JP site that I recently had mounted on my Glock 17. Once you get the red dot on that first target, acquisition of targets becomes very fast and surgically accurate.

I only had one malfunction with my Mossberg (which also has a red dot) and was about two or three inches low on one of my four slug shots- another failure to neutralize because I got over confident and only shot the target once. One hit in the A zone is all it takes to neutralize a target. The key is to stay focused and have a good time.

Inland Northwest Action Shooters will host a USPSA and a 3-Gun match every second Saturday during the coming months. The Fernan Range in Coeur d’Alene has also started a monthly 3-Gun match. Multigun is the fastest growing shooting sport and now appears on the Blaze channel for those of us that know Glenn Beck.

3-Gun Nation was featured on NBC until the school shootings in Connecticut scared the network away. I have never been able to view 3-Gun Nation on television but I am sure that Patrick Kelley makes it lively.

Pat is a treasure trove of information about many of the personalities, techniques and history of modern shooting sports. I hope to be watching him on television soon! Patrick is also available for classes, usually with groups of about six people.